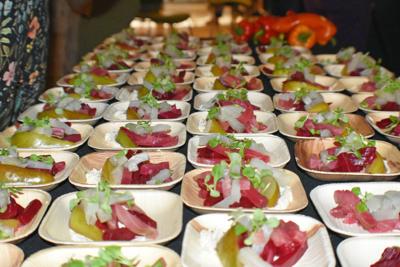 Chef Tami Lax of Harvest and The Old Fashioned prepared roasted and pickled beets with hazelnut cream. The beets are three new varieties developed by Solveig Hanson and Irwin Goldman at UW-Madison (Photo by JUAN ASTROZA)

What started as a small tasting in a church basement five years ago has grown to a full-fledged foodie event bringing together hundreds of people to meet UW-Madison professors, plant breeders, farmers and some of Madison’s top chefs.

They gathered Thursday evening for “Farm to Flavor” — a public event that, quite literally, celebrates the fruits and vegetables of their labor.

The breeders connect with chefs who try dozens of varieties of a single crop every month and offer feedback on what customers may enjoy. August featured tomatoes, sweet corn and peppers.

Scientists rely on the chef’s observations to identify the most promising varieties, which they send on to farmers and gardeners across Wisconsin. Both of those groups grow the crops and evaluate them.

Through trial and error, the goal is to create more flavorful produce, something that’s not typically a top priority for farmers and breeders working in mass production. There, the focus is on engineering fruits and veggies to withstand weeks of travel, ripen after picking and sustain a uniform appearance for supermarket shelving.

“It doesn’t matter to me if a cucumber can last on a truck for two weeks or what it looks like,” said Madison Sourdough chef Molly Maciejewski. “It matters what it tastes like.”

She is one of the newer city chefs to join the lineup at Seed to Kitchen.

This article was posted in Faculty, News, Research.