In 2005, horticulture professors Irwin Goldman and Jim Nienhuis started a new campus tradition: the annual Giant Pumpkin Regatta. Inspired by a listener question during their segment on a local gardening radio show, Goldman and Nienhuis wondered if pumpkins could be seaworthy. Sixteen years later, the silly celebration of fall vegetables continues. Normally, growing the giant pumpkins and hosting the regatta are led by undergraduates in the Horticulture 370 class. But the pandemic forced a change after canceling 2020’s event. Goldman’s lab members took over growing the pumpkins and running the event on a beautiful October Saturday. 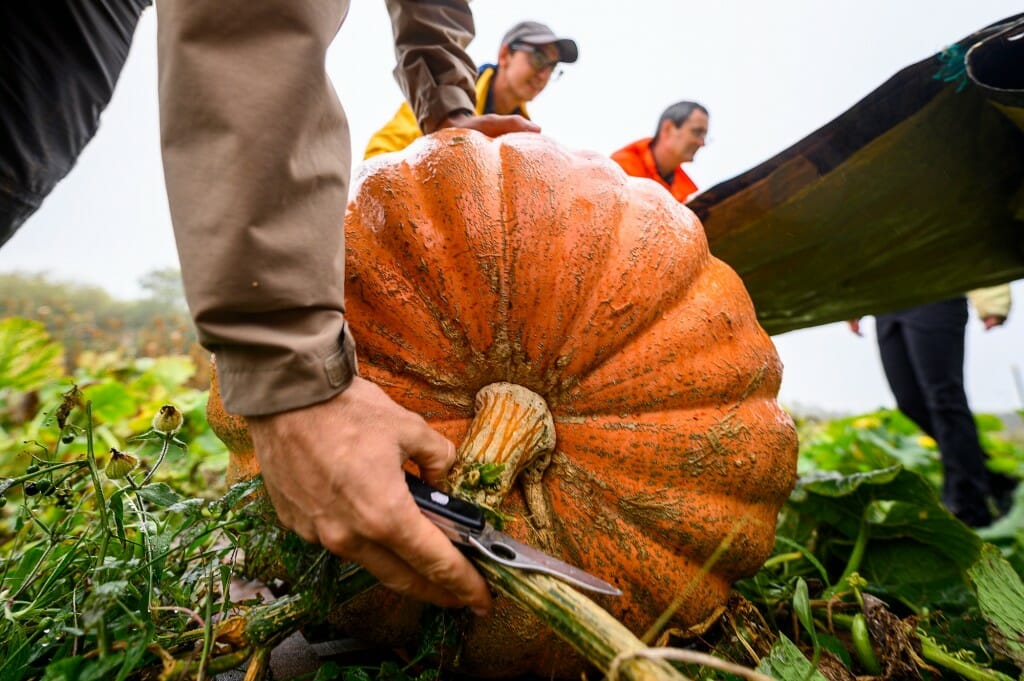 1Graduate student Andrey Vega-Alfaro readies a knife to free a large squash. To grow giant pumpkins, horticulturalists start with special hybrid seed of the variety Atlantic Giant. Then, they remove all but one fruit from each vine, so the plant can pump all its energy into one massive squash. The largest pumpkin on record weighed 2,624 pounds. These weigh about 100 pounds. PHOTO BY: ALTHEA DOTZOUR 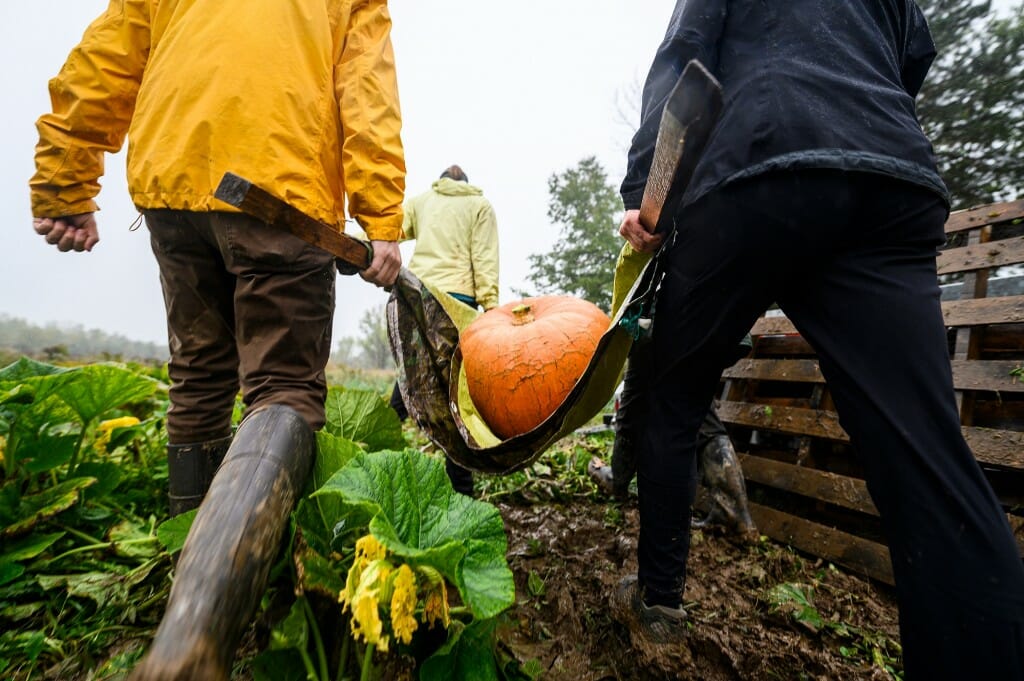 2Students use a jury-rigged stretcher made of tarp and wooden stakes to transport the pumpkin “patients” from the field to the trailer that will take them back to campus. PHOTO BY: ALTHEA DOTZOUR 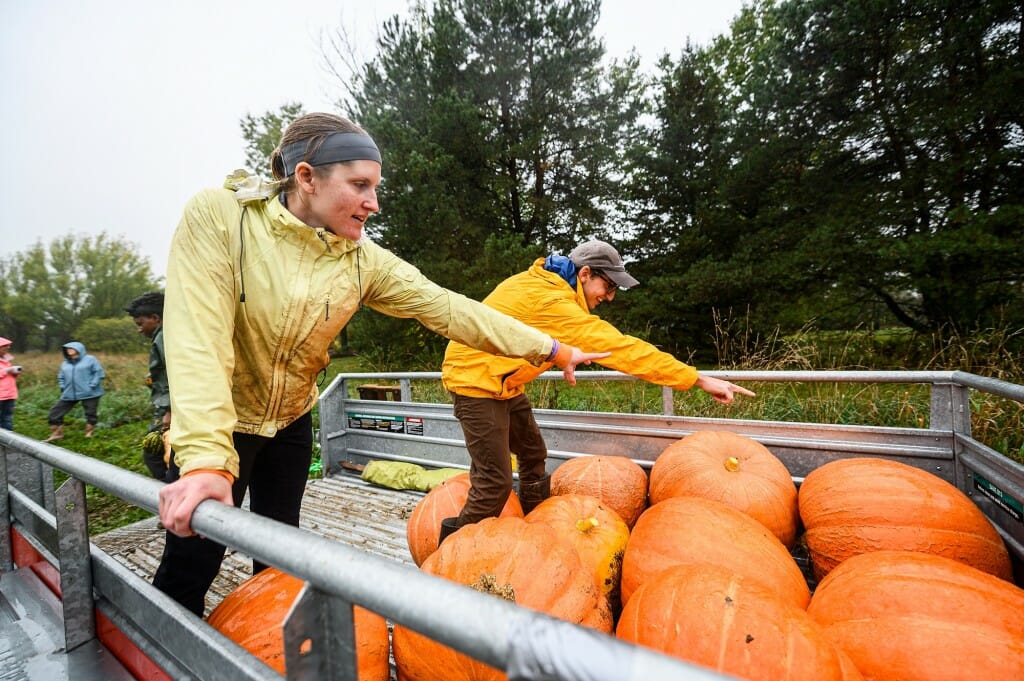 3Opportunity came calling when graduate student Emilee Gaulke, left, and her parents offered the plot behind the family home in Hartland, Wisconsin, to grow the pumpkins. After starting the plants in the Walnut Street Greenhouse on campus, Goldman and his lab members transplanted the vines to Gaulke’s home. Two days before the regatta, the lab, including Adam D’Angelo, right, joined to harvest the pumpkins and transport them back to campus. PHOTO BY: ALTHEA DOTZOUR 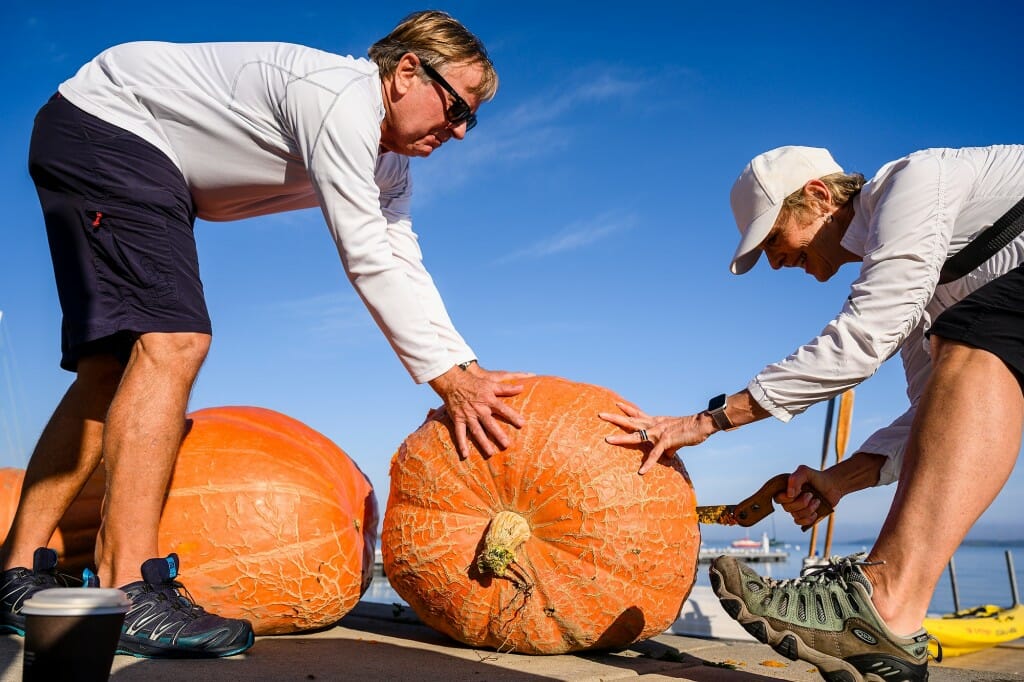 4John and Ann Strassman stopped to help prep the pumpkins for sailing during a visit to the Terrace from Milwaukee. Every October, the couple makes sure to visit campus, where John graduated in 1975 and again in 1979 with an MBA. Their daughter graduated from UW–Madison in 2009. PHOTO BY: ALTHEA DOTZOUR 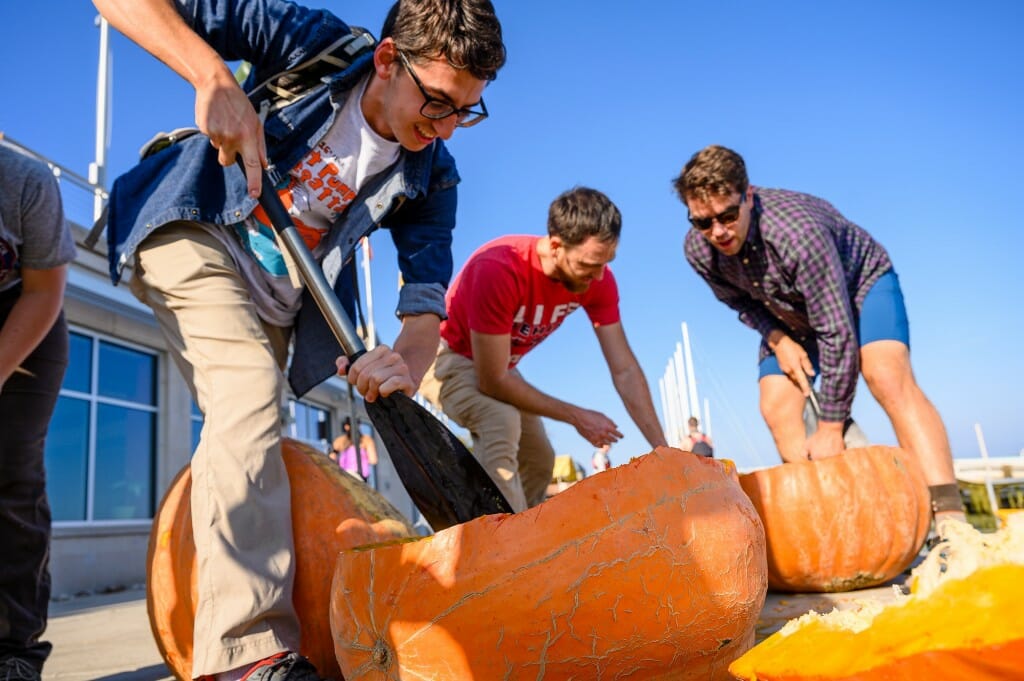 5Left to right, Adam D’Angelo, Joel DeMeritt and Liam Dixon use the tools they have available — kayak paddles — to scoop out the innards of the makeshift boats. PHOTO BY: ALTHEA DOTZOUR 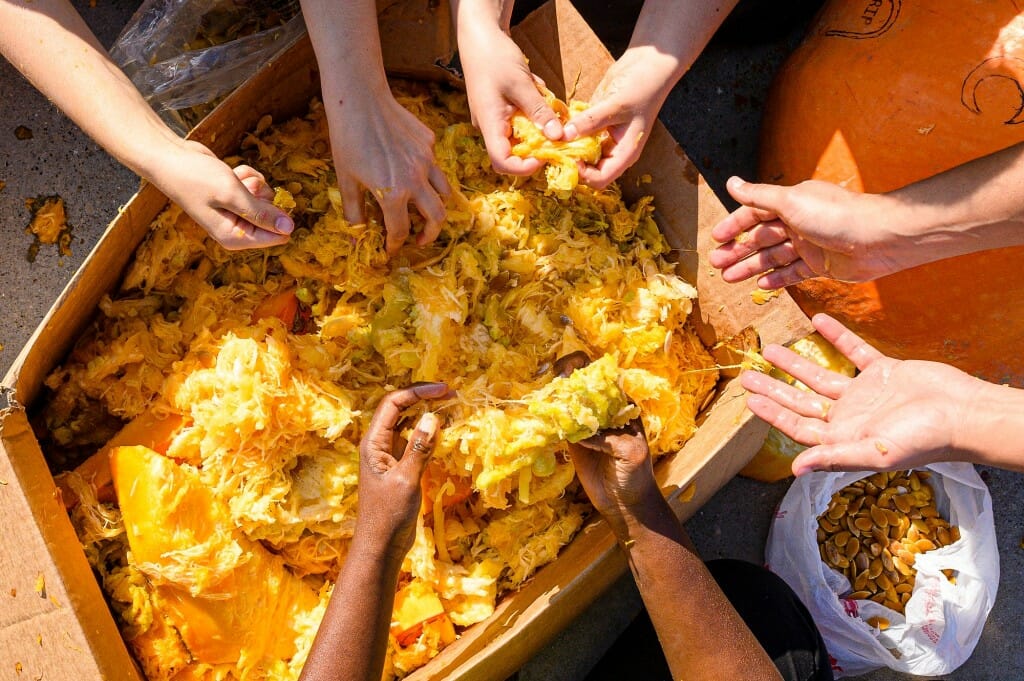 6Students pick the seeds out of the guts of all the squash. On the inside, giant pumpkins look just like their jack-o-lantern cousins. The seeds make a good snack, says Goldman, and can be saved to plant the following year. The Horticulture 370 class that normally grows the gourds also does pie taste tests with giant pumpkins and other squash. The winner every year? A butternut squash variety — just like most canned “pumpkin.” PHOTO BY: ALTHEA DOTZOUR 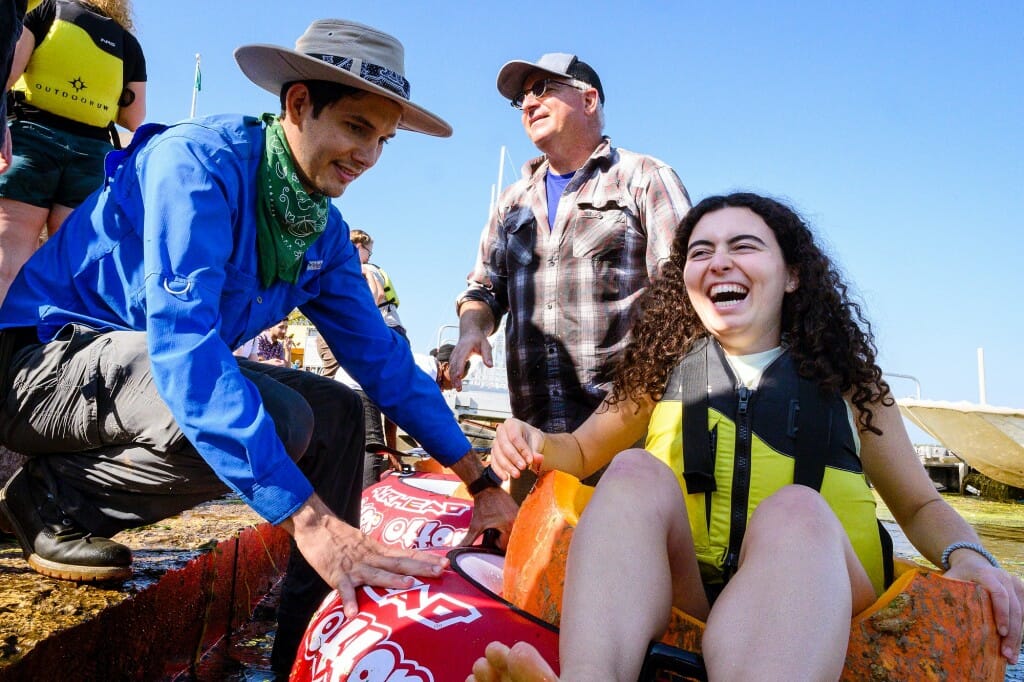 7Graduate student Andrey Vega-Alfaro readies Irwin Goldman’s niece, Eva Goldman of Detroit, for her voyage. Although the pumpkins float on their own, their distinct lack of hydrodynamics tends to tip sailors over. A handy inner tube stabilizes the squash enough to safely paddle in. PHOTO BY: ALTHEA DOTZOUR 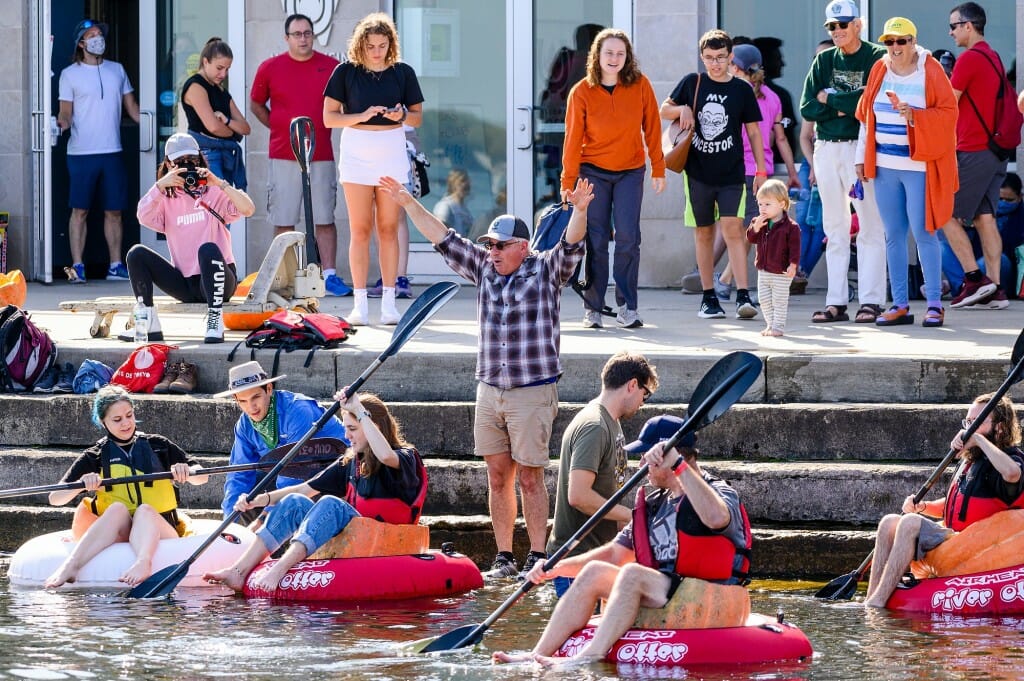 8Irwin Goldman launches the first of many “heats.” Racers were directed to row around two buoys set out in the water before returning to the Terrace steps. But wonky turns and the occasional capsize meant the race course wasn’t always followed. PHOTO BY: ALTHEA DOTZOUR 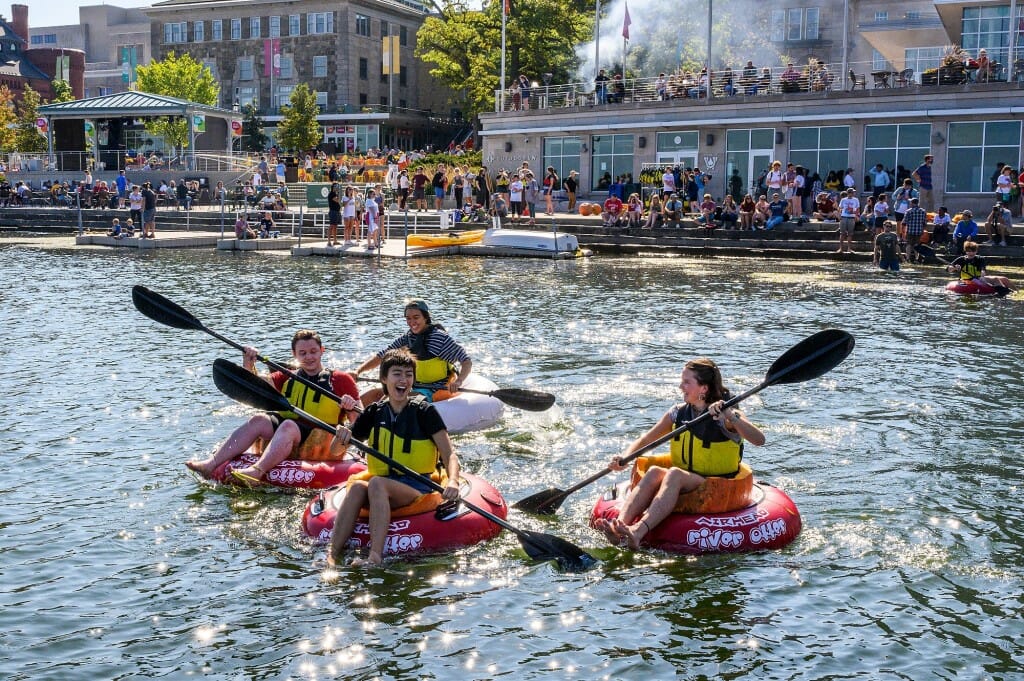 9Racers vie for bragging rights — the only reward for first place. Many boaters originally planned just to watch, but eventually jumped at the chance to take their turn in the pumpkin seat. PHOTO BY: ALTHEA DOTZOUR 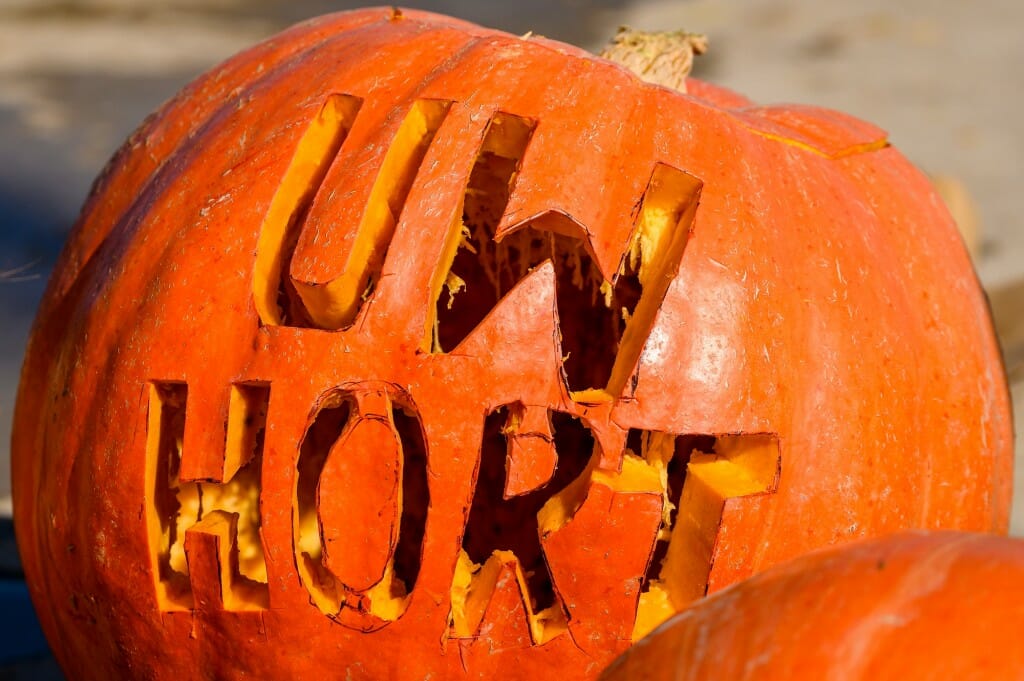 10UW–Madison Horticulture pride on display. The pumpkins that weren’t quite seaworthy made excellent carving fare. PHOTO BY: ALTHEA DOTZOUR